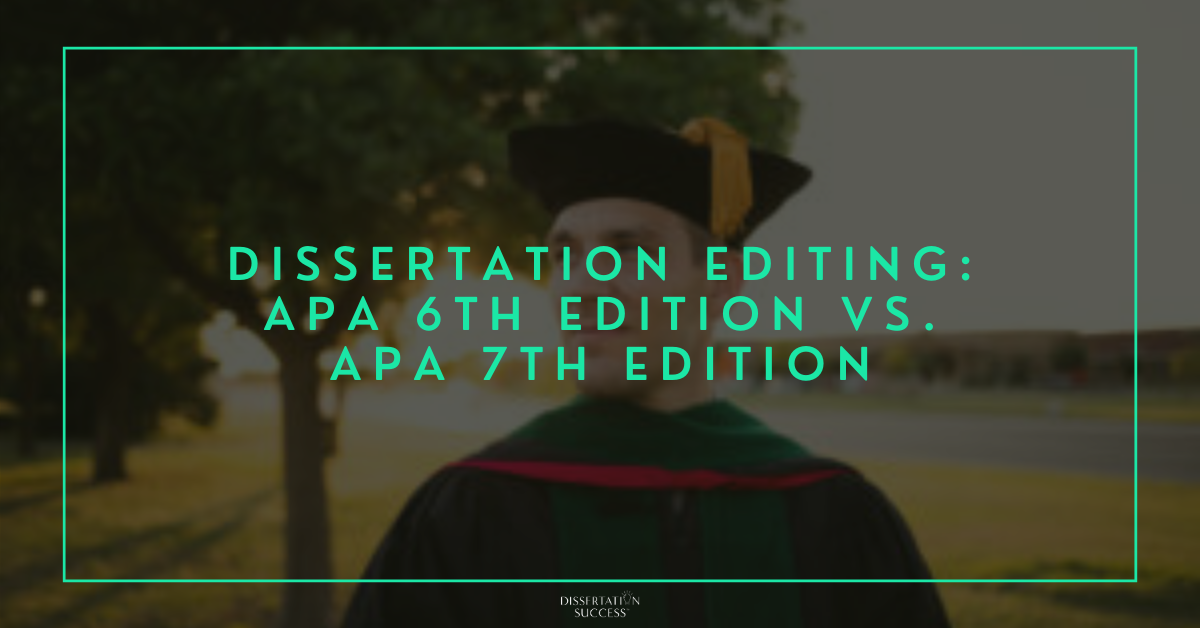 Although the 7th edition of the Publication Manual of the American Psychological Association came out in late 2019, most universities and journals didn’t begin implementing the new guidelines until the first quarter of 2020. Students near the end of their dissertation journeys were often grandfathered into 6th ed. guidelines, whereas those at the beginning or in the middle of the process found they had to transition to 7th ed. As you might expect, there was much confusion.

As an editor, I have helped countless students put their chapters, proposals, and dissertations into APA 7th ed. style. Doing so isn’t as difficult as you might think. Here is a look at some of the differences between APA 6th and 7th edition.

Finally—finally!—APA has recognized what the digital world has long known. Back in the day of the typewriter and its uneven line spacing, two spaces after a period made sense. However, the switch to word processing programs and computers (we’re going back to the 1990s here) corrected this concern, making double spacing look, well, weird. With the 7th ed. of its style manual, APA finally got on board with AP, Chicago, and the rest of us. Let’s end the debate for once and for all: Use only one space after all punctuation.

In APA 6th ed., third-level headers were part of the paragraph; now, in 7th ed., they’re outside the body text. Making this switch is, of course, a manual procedure, but trust me: Your document will look much better—and the subsections easier to identify and follow—when you implement the new heading styles.

Tip: Make sure to assign paragraph styles to all of your headings. This will not only ensure uniformity (and correct formatting) throughout but allow you to create and automate your Table of Contents.

Remember the Dark Ages, when you listed up to five authors at first mention and then used et al. for all subsequent uses? This meant you had to keep track of whether you had already used the full list of authors or run a style checker (such as Recite) and go through the sources it flagged (some of which were a little fuzzy). Now it’s easy: All in-text citations of three authors or more are just the first author and et al., whether it’s the first use or the 50th.

Above? Below? Bold? Italics? Punctuation? No more trying to remember where the table and figure titles go and how to format them; now it’s easy! Titles go above both tables and figures, with the number in bold and the title on the next line in italics. Table and figure notes have also changed. They’re still located below the table/figure but are now 12-point double-spaced instead of 10-point single-spaced. (I have to admit, I’m not a fan of the notes changes.)

There are some numbers changes you should be aware of when creating in or converting to APA 7th ed. First, remember how all numbers in the abstract were presented in numerals, no matter how big or small they were? You can forget about that. Spell out numbers under 10 in the abstract, just as you do everywhere else in the paper. Another welcome number change is using numerals and the % symbol for all percentages, whether the numbers are above or below 10. Ahh, consistency!

The most changes you’re likely to encounter from APA 6th ed. to 7th ed. are the references. Now, APA wants you to put back those deleted journal issue numbers, get rid of the publication city, use URLs only if they are direct links not requiring a log-in, and use the https://doi.org format instead of doi:. There are also changes to citing the not-as-common sources, such as conference and paper presentations, dissertations, videos, blogs, and more. Most of these will become second nature rather quickly; others will require you to keep your style manual handy.

If you have APA 7th ed. questions, the first place to start is the APA style blog. Of course, you’ll want to refer to your publication manual. Some university online writing labs (e.g., Purdue, Excelsior) are extremely helpful, as are Google searches for quick answers. And if you’re still scratching your head, I’m happy to help.

This article was written by Dr. Laura Schlater.

BACK TO BLOG
Written by The Dissertation Success Coaching Team